Happy December! It’s been a year since I started blogging

Very content most days (no particular reason, I think humans have a great capacity for joy and beauty – if one is exercise lots and have interests and don’t interact with idiots one is probably more likely to find it).

THE SUPRISING UPSIDES OF BEING CLEVER.

I think someone once mentioned me in a BBC article called THE DOWNSIDE OF BEING CLEVER.

From e-mails I received following the article (thanks everyone who wrote, I try to keep up when I can!) he was talking more about himself here.

The writer, David Robson himself is a maths Oxbridge graduate.

Against the rugby playing future investment bankers who got all the girls, or the mega-bright guys, David Robson felt insecure.

An Oxbridge degree was not his golden ticket to happiness.

He decided to tie his whole self-esteem into a bad few years in a somewhat pretty city with a university in it.

David Robson gave up on himself and his own emotions, and decided to make a career out of surfing the internet looking to “research” and”prove” others are unhappy in over-dramatic, clickbait articles, rather than just getting on with his own life.

(I myself was a bit of a weirdo at Oxford and didn’t like it.

But one’s thirties are emotionally a lot better than ones’ twenties.

You start becoming more aware of your own identity and needs and start – or should start – filtering out toxic people. And everyone has moments of joy along the way. You get more good memories as you get older and that starts taking you over).

Personally, I don’t really give much headspace to this – I have no idea what my IQ or anyone else’s is.

That said, I think is actually fairly cool being what they “clever” (in my case, I’m brightish and I pick up new concepts easily and I am content with that).

I spend lots of time as an adult woman seeing art and opera and playing round with fashion and riding round tree-lined parks and having interesting intellectual conversations with friends I respect.

Indeed there are always challenges but I’m grateful for the texture of my day-to-day life.

And also, as a feminist, being a little bit bright and self-aware helps in ones personal life.

…trying to impress everyone who we don’t know, or do The Right Thing when it comes to sexuality or career or relationships rather than what they really want or find intriguing.

…or frantically dealing with drama-ridden, manipulative, toxic family members or people or even having a toxic family with someone we don’t want to be with… (out of guilt or fear).

It takes a certain amount of intelligence  to detach from all that. One works for one’s own peace of mind,

Feeling content is NOT good for writing. I love blogging and my readership is awesome and I love being part of the uncertain crazy world of Waywire.

It’s odd because “me now” is very content, so can feel quite detached from it. I struggle with motivation to keep blogging. 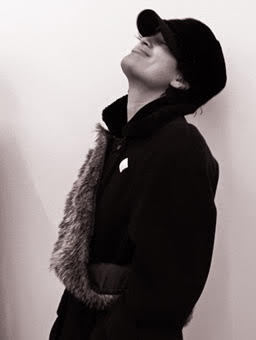 Me having a thoughtful moment –

When I was twelve, lots of journalists picked up on the Oxford story.

They saw a “soft target” in my father.

He was mentally ill, completely friendless, clearly emotionally within a very weird, closed-off world, and desperate to “impress the white people”. So he would allow them total access.

The producers (all of who liked to see themselves as “good blokes” and “nice middle class women”) would tell my violent abusive father to tell his children to go into weird poses so they could film/photograph me looking as weird as possible.

As an adult who has kind of “grown past them”, it is vile having any interactions with (or even thinking about) journalists as they tend to be full of self-pity, drama, and manipulation.

Not to mention over-sensitive about their own image. I am not sure how to respond to journalists who would happily stalk me as a child yet try to deny me the right to then speak about my experiences with them.

The are the kind of people who think everyone “owes” them for their own unhappiness, when it is down to their own cowardice.

I owe my past self that.